skip to main | skip to sidebar

As of this week, I now officially have no space for any new kitchen equipment in my flat (please note if you are already thinking about buying me a Christmas present). This is annoying, because I have also just applied for a new mortgage and have worked out that it's likely to be another five years before I can afford to buy a new place with a larger kitchen. That means five years without buying any new cooking gear. I'm sure I will survive, but it will take self restraint.

The reason for this storage crisis is that I have bought a new toy - a pasta maker. And today was my first attempt at making pasta with it. 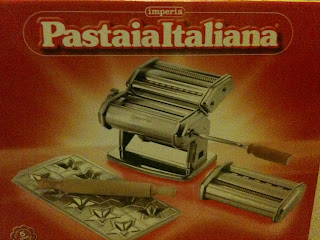 The main attraction of buying a pasta maker was the ability to make stuffed pasta like ravioli and tortellini. I'm sure that homemade spaghetti and tagliatelle are sufficiently superior to what you can get out of a packet to make it worth the effort or the special equipment. But homemade ravioli allows one to be a great deal more creative. 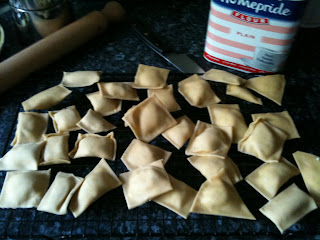 The pasta dough itself was very easy to make - just flour and eggs blitzed in the food processor. It looks slightly odd at first, because what you're left with looks like a bowl full of yellow crumbs. But the crumbs come together into a stiff dough very easily.

The pasta maker itself took a bit more getting use to, but it was very satisfying feeding the sheets of pasta through the machine, watching them get progressively thinner. 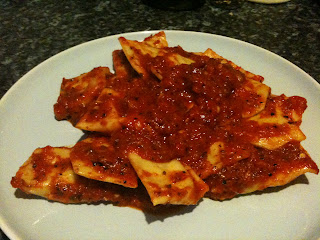 The pasta maker came with a ravioli mould included - however, since I didn't feel like making star-shaped ravioli tonight (the novelty of that wore off before the machine had even arrived in the post), I decided to make the ravioli freehand.
For the filling, I mashed up a pack of ricotta with an egg, grated parmesan, fresh thyme and black pepper. For the sauce, I charred some long red peppers under a very hot grill before blitzing them in the food processor and then mixing them with garlic and red chilli sautéed in olive oil, more fresh thyme, and the juice of a lemon. Amazingly, the ravioli did not fall apart as soon as they hit boiling water, which I was convinced they would do. The end result was very impressive and far better than anything you can buy in a supermarket. It definitely wasn't a quick meal to prepare, but it was worth the effort, and I'm sure I will be experimenting more in the near future.
Posted by Matthew at 21:43